We recently had a job north of the Thames – venturing into Holborn to carry out some work for the Barristers of Radcliffe Chambers at Lincoln’s Inn. The chambers are situated in the New Square, which is actually quite old and dates back to the end of the 17th century though work was also done on the buildings during the middle of the 19th century. Outside, Lincoln’s Inn Fields is pleasantly set out and is undoubtedly a great space for the barristers to think about their upcoming cases! 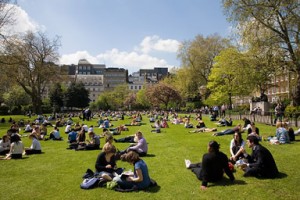 A number of commercial electricians in London had put in tenders for the work on their meeting rooms and we were pleased when ours was selected.

The wiring was old, as were the light fittings and the barristers had opted for energy saving T5 fluorescent tubes. T5 fluorescent tubes are thinner and slightly shorter than conventional T8 tubes and typically use 40% less electricity but output around 10 – 15% more light, so there is a double advantage to converting your lighting to T5 – brighter working conditions at a little more than half the running cost.

The job was one of general maintenance of the cabling and fittings as well as installing the energy efficient lighting. Once we had run the diagnostics and made a thorough visual inspection of the system, we got underway, changing the light fittings, swapping old light switches for new, replacing faulty cables and installing replacement wall sockets. When we had finished, their meeting room wiring and lighting had been thoroughly brought up to date to meet current electrical standards.

Having been around for so long, the place was full of character so we needed to be very careful in places. They were extremely pleased with the quality of work and how tidy we left the chambers.

If you require commercial electricians in London to upgrade the wiring on your historic building, contact South London Electricians on 0208 406 9834 to find out how you can benefit from our expertise and experience.